The world is facing an acute misuse of talent by not acting faster to tackle gender inequality, which could put economic growth at risk and deprive economies of the opportunity to develop, according to the World Economic Forum’s Global Gender Gap Report 2016, which is published today.

The report is an annual benchmarking exercise that measures progress towards parity between men and women in four areas: Educational Attainment, Health and Survival, Economic Opportunity and Political Empowerment. In this latest edition, the report finds that progress towards parity in the key economic pillar has slowed dramatically with the gap – which stands at 59% – now larger than at any point since 2008. 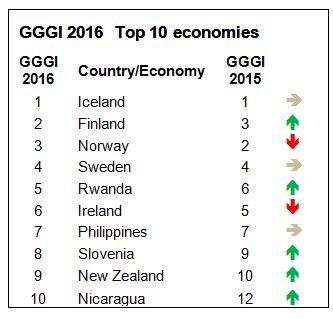 Behind this decline are a number of factors. One is salary, with women around the world on average earning just over half of what men earn despite, on average, working longer hours taking paid and unpaid work into account. Another persistent challenge is stagnant labour force participation, with the global average for women standing at 54%, compared to 81% for men. The number of women in senior positions also remains stubbornly low, with only four countries in the world having equal numbers of male and female legislators, senior officials and managers, despite the fact that 95 countries now have as many – if not more – women educated at university level.Click here for a selection of infographics.

In 2015, projections based on the Global Gender Gap Report data suggested that the economic gap could be closed within 118 years, or 2133. However the progress has reversed since then, having peaked in 2013.

Away from economics, the education gender gap has closed 1% over the past year to over 95%, making it one of the two areas where most progress has been made to date. Health and Survival, the other pillar to have closed 96% of its gap, has deteriorated minimally. Two-thirds of the 144 countries measured in this year’s report can now claim to have fully closed their gender gap in sex ratio at birth, while more than one-third have fully closed the gap in terms of healthy life expectancy.

The pillar where the gender gap looms largest, Political Empowerment, is also the one that has seen the greatest amount of progress since the World Economic Forum began measuring the gender gap in 2006. This now stands at over 23%; 1% greater than 2015 and nearly 10% higher than in 2006. However, improvements are starting from a low base: only two countries have reached parity in parliament and only four have reached parity on ministerial roles, according to the latest globally comparable data.

The slow rate of progress towards gender parity, especially in the economic realm, poses a particular risk given the fact that many jobs that employ a majority of women are likely to be hit proportionately hardest by the coming age of technological disruption known as the Fourth Industrial Revolution. This “hollowing out” of female livelihoods could deprive economies further of women’s talents and increases the urgency for more women to enter high-growth fields such as those demanding STEM skills. “Women and men must be equal partners in managing the challenges our world faces – and in reaping the opportunities. Both voices are critical in ensuring the Fourth Industrial Revolution delivers its promise for society,” said Klaus Schwab, Founder and Executive Chairman of the World Economic Forum.

Which are the world’s most gender-equal countries?
With women on average benefiting from only two-thirds of the access to health, education, economic participation and political representation that men have, a number of nations are emerging to challenge the traditional hegemony of the Nordic nations as the world’s most gender-equal societies. While the leading four nations are Iceland (1), Finland (2), Norway (3) and Sweden (4) – with Finland overtaking Norway – the next highest placed nation is Rwanda, which moves one place ahead of Ireland to 5th position. Following Ireland, the Philippines remains unchanged at 7th, narrowly ahead of Slovenia (8) and New Zealand (9), which both move up one place. With Switzerland dropping out of the top 10, 10th position is taken up by Nicaragua.

Elsewhere, the United States (45) loses 17 places since last year, primarily due to a more transparent measure for the estimated earned income. Other major economies in the top 20 include Germany (13), France (17) and the United Kingdom (20). Among the BRICS grouping, the highest-placed nation remains South Africa (15), which moves up two places since last year with improvements across all pillars. The Russian Federation (75) is next, followed by Brazil (79). India (87) gains 21 spots and overtakes China (99) with improvements across Economic Participation and Opportunity and Educational Attainment.

Regional outcomes
Countries from Western Europe – including the three largest economies, France, Germany and the UK – occupy 11 of the top 20 positions in the Index. While some countries have clear room for improvement (Italy drops 9 places to 50; Greece drops 5 to 92), it has now closed 75% of its gender gap, more than any other region. At the current rate, it could expect to close its economic gender gap within 47 years.

After Europe and North America, the region with the third narrowest gender gap is Latin America and the Caribbean. With 70% of its gap now closed, it boasts six countries to have fully filled both their education and gender gaps, more than any other region. It can also be expected at the current rate of improvement to have closed its economic gender gap within six decades. With Nicaragua the only country in the top 20, however, the performance of the largest economies – Argentina (33), Mexico (66), Chile (70) and Brazil (79) – is mixed.

The region with the fourth-smallest gender gap is Eastern Europe and Central Asia, with four countries – Slovenia (8), Latvia (18), Estonia (22) and Lithuania (25) – in the top 25. Slovenia is one of the top 10 climbers in the world since 2006. Like Latin America and the Caribbean, the region has also closed 70% of its overall gender gap; however, it is not expected at today’s rate to have closed its economic gender gap for another 93 years.

East Asia and the Pacific follows next, having closed 68% of its gender gap. This is a region of stark contrast, with a large distance between the most gender-equal societies such as the Philippines and New Zealand and economic heavyweights China (99), Japan (111) and Korea (116). The sluggish pace of change in these larger nations in part explains why current projections suggest the region will not close its economic gap for another 111 years.

Four nations from Sub-Saharan Africa – Rwanda (5), Burundi (12), Namibia (14) and South Africa (15) make it into the top 20; more than any other region except Western Europe. The region has closed nearly 68% of its gender gap; however, data suggest that it will only take 60 years for economic parity to be achieved – far less than other more developed regions of the world. But, high labour force participation for women tends to be in low-skilled roles in the region, a factor that will need to be addressed to ensure that economic parity leads to growth and inclusion.

South Asia, with 67% of its overall gap closed, is home to two of the top 10 climbers of the world since 2006: Nepal (110) and India (87). Nevertheless, progress in closing the economic gap has been negligible and it could take over 1,000 years to close the economic gender gap fully unless efforts are accelerated.

The lowest placed region – having closed 60% of its overall gender gap – is the Middle East and North Africa. With only Israel (49) in the global top 50, the next highest in the region are Qatar (119), Algeria (120), the United Arab Emirates (124). Like South Asia, progress in addressing economic inequalities has been too slow and will not be closed for a further 356 years at today’s rate. Nevertheless, it is home to some of the most improved nations since 2006 on economic participation, including Saudi Arabia (141), Bahrain (131) and Yemen (144).

“These forecasts are not foregone conclusions. Instead, they reflect the current state of progress and serve as a call to action to policy-makers and other stakeholders to double down on efforts to accelerate gender equality,” said Saadia Zahidi, Head of Education, Gender and Work, and Member of the Executive Committee at the World Economic Forum.

Methodology
The Global Gender Gap Index ranks 144 countries on the gap between women and men on health, education, economic and political indicators. It aims to understand whether countries are distributing their resources and opportunities equitably between women and men, irrespective of their overall income levels. The report measures the size of the gender inequality gap in four areas:

Index scores can be interpreted as the percentage of the gap that has been closed between women and men, and allow countries to compare their current performance relative to their past performance. In addition, the rankings allow for comparisons between countries. Thirteen out of the 14 variables used to create the index are from publicly available hard data indicators from international organizations such as the International Labour Organization, the United Nations Development Programme and the World Health Organization, and one comes from a perception survey conducted by the World Economic Forum.

In this year’s report, a key methodological change relates to the cap on the estimated earned income (raised from $40,000 to $75,000) to align with the UNDP’s new methodology and reflecting the change in income levels since the report’s inception in 2006.

Sorry. No data so far.